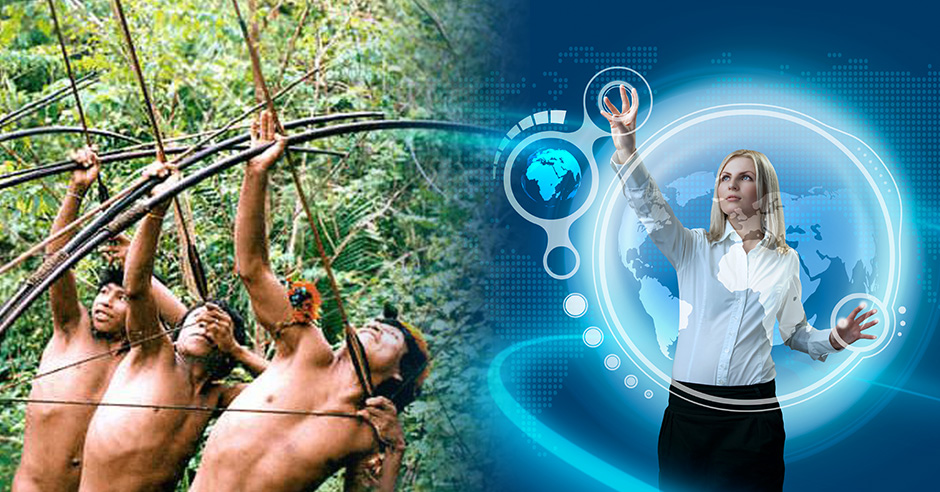 Immortality Conceptions. § 10.3.3.1. The qualitative structure of (LLUU-VVU) Stereo Form starting from the primitive communal to the civilized formation

10.0523 You are energy-informationally connected to all of them only by the rezonation activity of your DNA genes. When, in spite of your existing, “respectable” position in society, with its concomitant titles, regalia and authority, your life creativity begins to degrade gradually in some of the Directions of development to the primitive levels of mental-sensuous activity common to aboriginals of the “so-and-so” tribe or to native peoples (close to their level of development) that jump around a sacrificial fire and worship their totem, then this may serve you “personally” as an obvious sign of the process (that tends to appear in your refocusings) of a gradual return to the states which bring the manifestation of your UFS closer to these tribes and peoples, no matter in which Time Flows you “personally” (or they) are.

10.0524 The process of transformation of the Self-Consciousness (which is very difficult and lengthy process) into any of the Proto-Forms begins and is implemented only on the level of genetic activity which is individual for each NUU-VVU-Form focused by You. You always “displace” your UFS into Configurations of Forms which are able to satisfy to the utmost the creative Interest that appeared in your Self-Consciousness.

10.0525 If this Interest is so intense and irresistible that you are ready to sacrifice literally anything for it, then, in principle, it is of no importance to you which of Proto-Forms can provide you with the possibility of the quickest satisfaction of those urgent needs. If your interests are of low quality, such as the ones associated, for example, to an extreme degree of your infatuation with all sorts of violence or “rude-sexual” realizations, then, if you maintain that desire, you’ll eventually refocus into a Form which will provide you with the best possibilities for indulging it.

10.0526 I don’t mean by this that this Form will be the typical “human” body of a killer or rapist, whose Self-Consciousness represents only intermediate stages of refocusings from “more human-like” Forms into “less human-like” Forms. I mean those tribes and peoples which form joint types of subjective realities with animals (which have Configurations similar to theirs) who are considered “wild by nature”, from the point of view of civilized relationships.

10.0527 The moment when your UFS “comes out” of the Configurations of any Proto-Form does not result from purposeful and specific creativity of only one Stereo-Form during Life. It’s a psychic, mental, cultural, professional, social, and religious process which is as lengthy and as complex in implementation as the gradual “introduction” into It.

10.0528 The extreme limit for dynamics of such frequency “displacements” are manifestations in adaptative (borderline, diffusgent) Forms which, despite their primitiveness and intellectual underdevelopment, don’t consider themselves disadvantaged , unhappy or deprived of anything at all by civilization (if they have any idea of it). On the contrary, the less somebody intervenes in their Lives, living conditions, culture, religious beliefs, and relationships with other tribes, the happier and closer they are to the way of Life of their “totem”.

10.0529 As long as you perceive yourself as “a civilized human being”, such a perspective may seem dreadful and incomprehensible to you. They, however, not knowing any other possibilities, or other perspectives on their development, and recognizing only the primordial laws of their ancestors, thoroughly enjoy their primitive communal, original Lives. They wouldn’t change it for anything, not for any of the achievements of human civilization which is so far from (and absolutely inaccessible to) their earthy understanding.

10.0530 As long as you are intensively occupied in your life creativity with the Synthesis of low-quality SFUURMM-Forms of the two lower IISSIIDI-Centers, the subconscious energy-information connection with members of these wild and half-wild tribes (through lower Levels of the complementary System of Forms You focus) may influence potentially, to one extent or another, the quality of your “present” decisions. This will connect your Self-Consciousness frequencies with frequencies of specific manifestations of animal and plant Proto-Forms which very closely “cohabit” with these distant and seemingly inaccessible tribes.

10.0531 Every day, your Self-Consciousness is intensively affected by specific peculiarities of these Proto-Forms. It happens much more often than you realize. I would like to note that, for the realization of UU-VVU-copies that tightly structure (with frequencies of their characteristic diapasons) Configurations of the NUU-VVU-Forms You focus, it absolutely doesn’t matter whether you consider yourself “a civilized human being” who is no longer capable of “bad acts” or you enjoy engaging in cannibalistic rituals in a comfortable apartment.

10.0532 If even a slight necessity for the realization of something has been maintained for a long period in dynamics of Self-Consciousness, then the refocusings initiated by UU-VVU-copies of this ongoing Desire will bring you one day to its direct experience which may turn out to be so strong, unusual and deep that you’ll be completely dependent on it.

10.0533 Then everything that you — in your “present” judicious state — would never allow yourself even to think about, will become absolutely natural, desirable and indispensable to you. You’ll find yourself in the specific state of a deep plunge into some “vicious” or forbidden experience, without which your further existence will seem simply unthinkable and inadequate to you. Inertial refocusings from LLUU-VVU into other Proto-Forms happen exactly this way.

10.0534 Everyone is occupied in their Life with the things with which their Subconsciousness abounds. Your Subconsciousness also maintains in this Form close contact with subjects of your previous refocusings which are “nearest” to you in frequency, and it draws inexplicable fears and phobias, amiability and enmity, love and hatred, positivism and aversions, sympathies and antipathies “from there”.

10.0535 In addition to these psychic influences from other Proto-Forms you also acquire an innate disposition for some professional activity and aim to master the necessary skills, habits and character traits for it. You develop manual dexterity speed, physical flexibility, muscle strength, keen vision, sensitivity of perception, your pain threshold, moral steadfastness, fearlessness, cunning, as well as facial expressions, gait, and body movements.